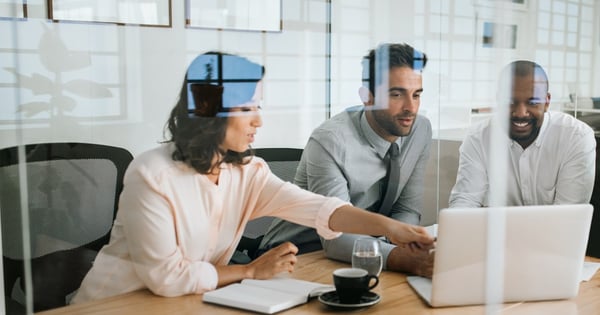 How do development programs, such as the skills of influence, significantly impact participants and business long term, for the benefit of attendees and their organizations? Changed human behavior is hard to measure but people recognize when their own changes have positive results. Many participants, who went on to be senior leaders, have shared the lessons they learned, from courses I had the opportunity to facilitate earlier in their careers. Not only did they value their own personal results, but as leaders, the new approaches they used cascaded down through their organizations for better culture and business results.

As a director, Jack received strong corrective feedback on his 360-degree feedback survey, a key component of a class on influence and collaboration that he attended. The feedback indicated he was viewed as uncaring, closed-minded, and too bottom-line focused without regard for people. He used this feedback as an opportunity to reflect, took the feedback to heart, employed the skills he learned in class, and actively worked to improve those skills. Years later, as a functional leader, he brought the class into his current employer, participated as the leader, and was nervous about his feedback on the same survey.

This time however, he received an average score of 4.7 out of 5 across all questions and respondents. Of thousands of 360 surveys I’ve reviewed, these scores are among some of the best I’ve seen. Snippets of respondent comments closely aligned with course content:

After the class, one of Jack’s direct reports took me aside to tell me that Jack’s leadership style had been pivotal in her decision to stay with the company when she faced personal hardship. Jack has grown to be a great leader because of his business acumen and ability to influence as a leader.

2. Being Viewed as Collaborative, Rather Than Combative

It takes courage for a leader to ask for help, but a two-time class participant did, and changed the perception of himself in his organization for the better. He didn’t believe a collaborative approach was a benefit in conflict situations and was very vocal in expressing that opinion. I already knew that wasn’t playing well for him within his company and surprisingly, two weeks after the class, he contacted me and asked for help. He confessed that his win/lose approach had been a life-long challenge and he wanted to learn a better way.

Over the course of a year, we continued our discussion in a coaching capacity, covering specific situations and what he could do differently. And it paid off. During his next annual review, his boss said he wished he had more employees like him. He learned how to communicate with an open-minded mentality so he could problem solve with others, rather than insisting on his perspective.

3. Realizing Others Have Valid Perspectives

An “aha” moment for a mechanical engineer occurred in class when she prepped a case study and then was assigned to play the client role in practice. She had low rated survey feedback, mostly because her tendency was to see things from only her perspective – not others’. After the role-playing exercise, and experiencing the client’s perspective, she had a revelation that the “other side” had relevant perspectives that she needed to understand. As a result, she and others reported being more effective leaders by improving their ability to better understand their audiences’ needs and care-abouts.

4. The Importance of Asking Questions Without Assumptions

Two mid-level managers, Alex and Lynn, attended a class on influence and collaboration and they ended up in tears, laughing, when they viewed their recording of “selling their perspective” practice. They realized just how badly they disconnected with their “client." These two Analytical personalities displayed no emotion verbally or physically as their very expressive client shared hers. Their response to every idea was some version of “no, we can’t do that." They clearly saw how ineffective they were in not showing any enthusiasm, not asking any questions, and not being open to any perspective but their own.

Years later, they were both executives and Lynn, the leader, often introduced future classes. She shared that shortly after the original class, she was a juror in a trial, determining if a defendant would go to prison. She, as did 10 of the 12 jurors, believed the person was innocent. She used the skills she learned from the influence and collaboration class to not ask questions with assumptions and manipulative wording like “After all the evidence, do you really believe the defendant is guilty?” Instead, she used questions like “What did you hear in the trial that indicates they are guilty?” to learn why the two jurors thought the person on trial was guilty. Understanding their perspective, Lynn and the other nine jurors, were able to provide the right information to the two hold-out jurors and the jury found the defendant innocent.

5. Being Recognized for Bringing Positive Change at a New Employer

Alex joined a company as an SVP, he had the Influence and Collaboration Skills classes he had attended in a previous role conducted for his new function (and had the social styles portion of the class be expanded, based on his own experience as an Analytical). Soon after the course was conducted, other functional leaders noticed new influential behaviors from his team and had the same classes conducted for their organizations too. Alex was seen as a leader providing value beyond his functional expertise. As many of his colleagues have moved to other companies, they’ve brought the classes with them, providing the same value to their new organizations.

There are other great outcomes people have shared, including personal wins, such as:

As everyone strives for fast and efficient today, emerging leaders still need to take time to learn new skills to be tomorrow’s leaders. No one learned to ride a bike by someone “efficiently” telling you how to do it. You got on the bike, practiced, made mistakes, and learned from those mistakes. That’s what well-designed leadership development does for you.

How might participation in a leadership development course help you be even more effective?

Janet Knupp is a Senior thoughtpartner™ with The Grossman Group. She has led Learning and Development functions at Nielsen and Quaker Oats and has worked with many Fortune 500 companies, such as McDonald’s, Kraft, Campbell’s Soup, Hershey, Northern Trust Bank, and Chase. When she is not working, you might see her riding her Harley Davidson, with her dogs in the sidecar, in the Chicago suburbs.

Interested in an Influence & Collaboration workshop for the leaders in your organization? If so, contact us today at results@yourthoughtpartner.com.

Free Webinar for Communicators: Heart First Method for Every Leader-Communicator to Lead with Impact

Leader’s Guide to Change: What You Need to Know and Do