Yes, There Is a Grandma Elsie 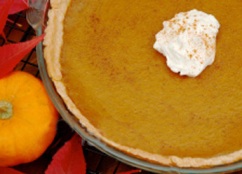 There are lots of ways to say thank you.  None as heartfelt and tasty and delicious as Grandma Elsie’s Famous Pumpkin Chiffon Pie.

Instead of getting holiday gifts for friends and neighbors, Elsie Edelstein made pumpkin pies and hand-delivered them before Thanksgiving.  The blessing, as she used to say, was in the making (“food brings people together”) and in giving ("it’s better to give than receive!”)

These are the tastiest, most delicious, mouth-watering pumpkin pies you’ve ever tasted.  Even people who don’t like pumpkin pies love her now-famous recipe.

For almost a decade, The Grossman Group has adopted her wonderful tradition and made pies for its in-town clients.  It’s a terrific team-building project for the thoughtpartners, and a wonderful way for us to say thank you to clients and friends.  Those outside Chicago receive the fixin’s and famous recipe to make a pie on their own.

The first pies were made in David’s kitchen almost 10 years ago.  As the agency grew, so did the need for a larger space – and larger pots!  Today, the team rents a local bakery, dons aprons, and gets to work at measuring, stirring, topping and packaging the hand-crafted pies.

David typically gets a phone call each year from Grandma Elsie’s daughter Sara, who asks how many pies the team is making. “Grandma Elsie’s smiling and laughing (in heaven),” she said one year, dumbstruck by how many pies the thoughtpartners were hand-crafting.  “Little did she know what she started.”  One year when Sara wasn’t able to make pies, she put in “an order” for pies at The Grossman Group.

You know it’s a special tradition when clients call in early November wondering whether the agency is making pies again this year, and whether they’re on the list.  One year, one of the thoughtpartners likened delivering pies during the week of Thanksgiving to “being the Publisher’s Clearinghouse guy with a big, fat check.” Many just-delivered pies never make it home, having been devoured at work.

Last year, a colleague and his partner, Brad Whitworth and Peg Champion, suggested another delicious use for Grandma Elsie’s spice mix as a great addition to a special pancake recipe.

And this year, we’re excited to debut another gem of a recipe – this time it’s a cocktail, again thanks to Brad and Peg.  Grandma Elsie’s spice mix is used in the drink and on the rim, as well.

Very fitting, we think, to now have a cocktail so we can toast Grandma Elsie.  We’re thankful for her wonderful brainchild and recipe, and for showing us all how it’s done.

It’s clearly better to give than receive.

Grandma Elsie, here’s to you!  Cheers, and Happy Thanksgiving. Download Our New Free E-book: Mastering the Art of Messaging

Great messages aren’t the result of momentary inspiration or a rogue creative genius.

The Best Pumpkin Chiffon Pie You’ll Ever Taste, And the Famous Woman Behind the Recipe

The Connection Between Change and Growth