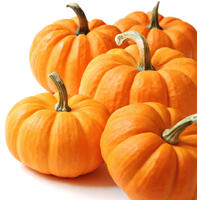 Yes, Thanksgiving is nearly here. That gives us plenty to look forward to—family, football, food, choose your poison—but at the top of my list is Grandma Elsie’s Famous Pumpkin Chiffon Pie.

The tradition is long standing, and for those of you who don't know the story behind the renowned pumpkin pie, I'd like to share it.  (The telling is fast becoming a tradition itself—one I'm going to share with my daughters.)

Instead of getting holiday gifts for friends and neighbors, Elsie Edelstein made pumpkin pies and hand-delivered them before Thanksgiving.  The blessing, as she used to say, was in the making (“food brings people together”) and in giving ("it’s better to give than receive!”)

These are the yummiest, most delicious, mouth-watering pumpkin pies you’ve ever tasted.  Even people who don’t like pumpkin pies love her now-famous recipe.

For more than a decade, The Grossman Group has celebrated Grandma Elsie's wonderful tradition by making pies for our in-town clients. This year, we're taking a break.  We'd like to say that it's in the spirit of encouraging all of you to make your own pies (it's a fun family activity, and they can be made a few days in advance and refrigerated), but the truth is two new babies (my second daughter, Noa, and Kate Bushnell's first baby, Sarah) have made life a little busier than usual this fall.  It makes for a lot to be thankful for, but not much time for baking. Not to worry, though, we'll be back with pies next year.

In the meantime, we hope you'll try the recipe—or one of the delicious recipes for Grandma Elsie’s spice mix! This year there's a new Grandma Elsie recipe we’ll be sharing with clients, friends and family – Organic Apple-Raisin Granola – another delicious treat from our friends Brad Whitworth and Peg Champion, whose recipes have become a centerpiece of our tradition for three years. So for those of you who are new to Grandma Elsie, check out more famous recipes including Apple Pancakes or Elsie’s perfect-for-fall Elixir here.

The Best Pumpkin Chiffon Pie You’ll Ever Taste, And the Famous Woman Behind the Recipe

What has Changed for Women in Business? Our Remarkable Women ThoughtPartners Share Their Stories