Chances are, you’ve had the experience at least once of being on a great team. Whether it was through work, a sports team, or another outside activity, the group just jelled and – most importantly – got things done. 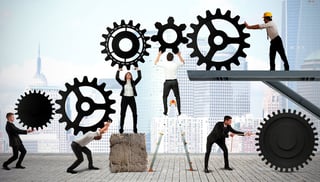 Fascinated by the question of what makes for an effective work team, Google recently studied hundreds of its own teams to determine why some performed better than others. The answer ultimately surprised them, and provides valuable insight into how companies can build stronger teams.

The Unexpected Results of What Great Teams Are Made Of

Before launching their study, Google executives thought the best teams were those that combined the best and brightest people. However, their study of 180 teams from all over the company debunked that idea. After examining reams of data on individual employees, Google found nothing to indicate that the mix of personality types, skills or backgrounds of the team members made a difference.

Instead, Google determined that the most important indicators of an effective group were strong communication skills and overall engagement with each other.

In an article for the New York Times Magazine on Google’s findings, Charles Duhigg described how important it was for a team to communicate better and get to know one another on a more personal level. The concept of “psychological safety” was highlighted – where the team culture encourages individuals to be vulnerable and freely share their views, even when the ideas might be controversial or against the grain.

However, Duhigg underscored how difficult it can be to establish psychological safety. Employees can be encouraged to take turns during a conversation, listen to each other more, or be sensitive to how their colleagues feel, but many people will remain cautious and uneasy when it comes to revealing true emotion in a work setting.

“Google was trying to build the perfect team. Along the way, they learned that teams where people shared their feelings and talked more about their personal lives – their lives outside work – built a stronger rapport and were more effective,” Duhigg wrote. “The paradox, of course, is that Google’s intense data collection and number crunching have led it to the same conclusions that good managers have always known. In the best teams, members listen to one another and show sensitivity to feelings and needs.”

Still, no matter how messy open communication can be at times, clearly it will become even more important in the future for today’s employees as an increasing number of organizations move to a team-focused approach. A study published recently in the Harvard Business Review found that the time spent by managers and employees in collaborative activities has ballooned by 50 percent or more over the last two decades.

The message is clear: paying attention to how teams interact is critical for effective leadership. That means more courageous approaches and conversations, the kind that take us all out of our comfort zones and closer to what truly matters – real communication and real results.

What has been your experience on teams? For the teams that worked well, what do you think were the keys to success?

Get the skinny on what it takes to create an organization with strong internal communications and engaged employees by downloading the ebook below.

The Evolution of The Successful Leader